I think that it is reasonable to assume that we all want and desire to live in a fair society. And, in its essence, fairness requires us to look at all the options; to be open-minded. If we ever have the misfortune to end up in court we hope that the jury looks upon you with an open mind and explores all the options before dispensing justice. But it is not just these extremes where it matters. It matters in our day-to-day lives.

We all have aspects of our identities that other people will look upon with negative stereotypes, for some of us we are fortunate for this to just be an annoyance. I, as a white male with a British accent, have learnt to hide most of mine from a young age. I do not mention being an immigrant in the wrong circles, have developed many mechanisms to hide my quite severe learning problems and others I just do not talk about to anyone. Unfortunately, many people are not so lucky – negative stereotypes plague their lives.

The teenage single mother considered too promiscuous, the young black man in a hoodie seen as a criminal or the immigrant with broken-English treated constantly as an idiot. Stereotyping can make life miserable, which is why we talk about it in our school workshops. Thankfully, the solution is pretty easy – approach life with an open mind and you are less likely to stereotype those around you. However, is this a privileged answer?

David Hume once wrote that we can only learn about the world from experiences in our past. What if we live in a town or community that do not afford these opportunities? In my previous article I wrote about some of these communities and the young people growing up in them.

This is why on February 12th we invited two schools from rural Cambridgeshire and another from Mansfield to London for a day out to remember.

We started the day with a SMSC (Social, Moral, Spiritual and Cultural education) tour of the West End. We showed them temples, Chinatown, London’s Jewish history; things they do not have access to in their hometown. As one teacher said “This is great, when are they going to see a Hare Krishna temple in Wisbech?” We also showed them the Admiral Duncan, where David Copleland planted a bomb to attack the LGBTQ+ community in 1999 to show the pupils the horrors that hate and prejudice can lead to. However, it was in the afternoon where the real magic happened. 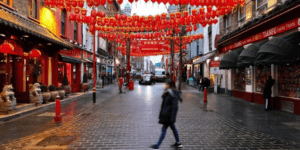 We were very lucky to have the support from Facebook who hosted the afternoon in their London Headquarters. The put on a series of workshops that aimed to boost the pupils’ aspirations and confidence; as part of their journey to become active bystanders. 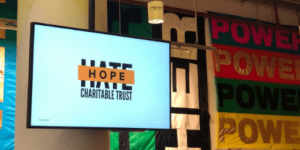 For one of the activities the pupils were asked to write down what they would do “if you weren’t afraid”. At the end of the activity a young, very shy, 14 year old girl read her answers to the group.

Go on a plane…

Not be afraid to speak in public”

She said the last one ON STAGE at the headquarters of one of the biggest companies in the world, in front of some of Facebook’s senior staff and a huge crowd! Amazing.

The teacher feedback was incredible. They were so proud of their pupils. Their horizons were broadened and confidence increased. Pupils who are normally too shy to speak getting involved.

This is how we fight prejudice. We broaden minds and open possibilities.

These pupils are now HOPE not hate Ambassadors, and we hope they continue with this journey through their lives and encourage those around them to do the same. A fair world is possible.

In the fight against hate, we win by working together. Sign up to receive emails about campaigns, stay up to date on the latest news, and have us send you simple actions you can take to help spread HOPE.

Stop the far right in their tracks

Help us challenge hatred and build communities. Your donation to HOPE not hate Charitable Trust will make a big difference