Generation Identity United Kingdom and Ireland: The Runt of the Litter

Since launching in October 2017 the UK and Ireland branch of the Generation Identity (GI) network has suffered one major setback after another. The first… 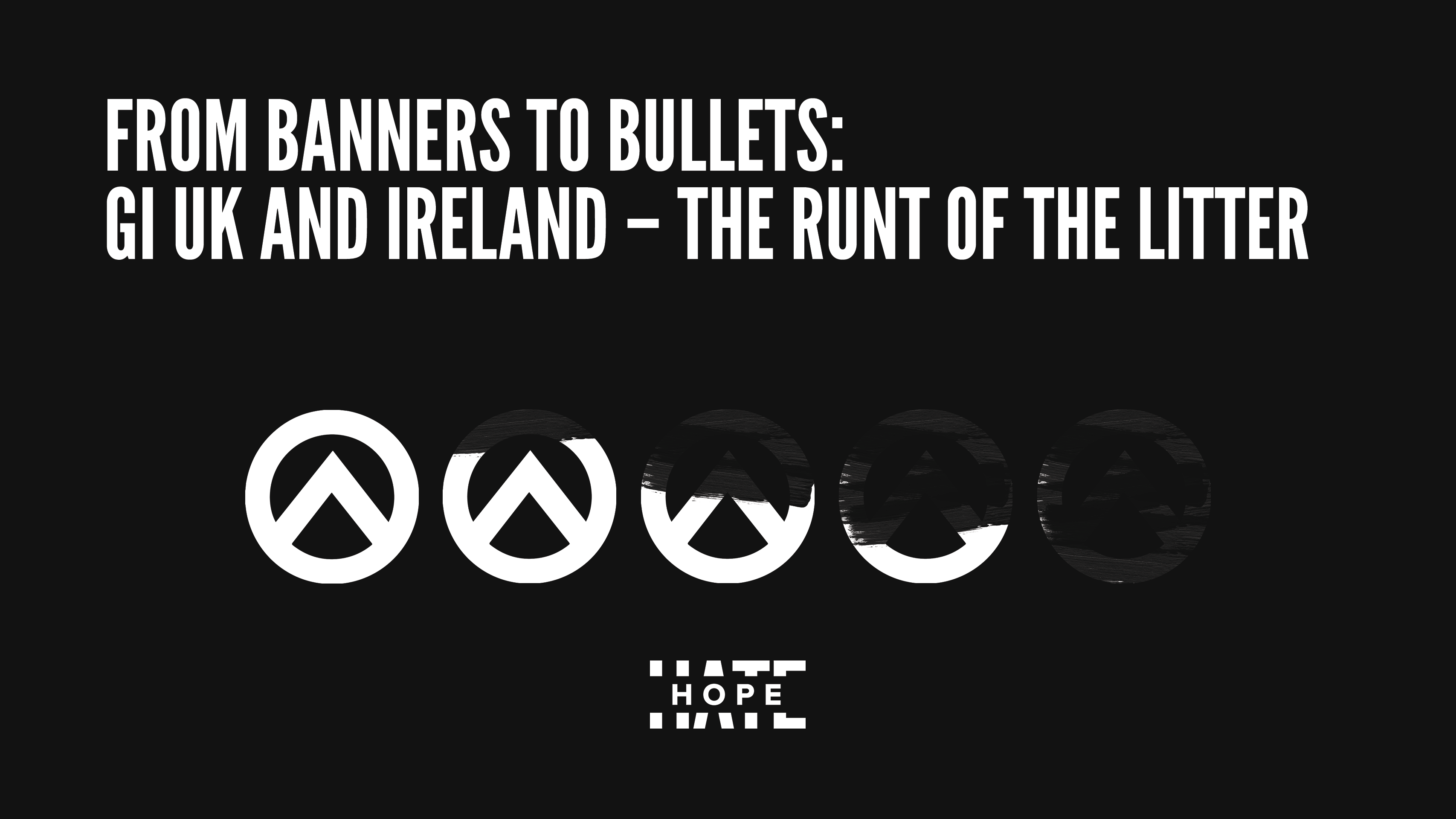 Since launching in October 2017 the UK and Ireland branch of the Generation Identity (GI) network has suffered one major setback after another.

The first major blow came as soon as the organisation launched when then-leader Jordan Diamond distanced himself from the group following an undercover exposé by ITV, with the help of HOPE not hate, that caught co-leader of the Austrian branch and de facto leader of the movement Martin Sellner using a racist epithet while planning the official UK launch banner drop. The exposé scuppered the launch and embarrassed the UK branch in the eyes of the international network.

However, they survived under the new leadership of Tom Dupré, a former City banker who had studied psychology at Bristol University and under whose leadership the branch steadily began to grow. In March 2018, after Sellner was denied entry to the UK following a campaign by HOPE not hate, British anti-Muslim activist Stephen Yaxley-Lennon (AKA Tommy Robinson) delivered the speech Sellner was due to give at Speakers’ Corner in London’s Hyde Park, where members of GI UK and Ireland were in attendance. In the same month HOPE not hate also revealed that Jake Bewick, then a GI UK activist, had previously been a member of the now-proscribed neo-nazi terrorist organisation, National Action (NA).

In anticipation of GI UK and Ireland’s first conference to be held in Sevenoaks, Kent in April 2018, HOPE not hate published A New Threat? Generation Identity United Kingdom and Ireland outlining the movement. The conference was beset by problems from the off: a venue move from London to Kent days before, the new venue’s location revealed by HOPE not hate on the day of the event, technical problems throughout, and planned speakers unable to make it to the conference, with Sellner and the Hungarian co-leader Abel Bòdi being barred entry into the UK. Alongside members of GI UK and Ireland speaking, Freya Hornold of GI Germany and the German GI-linked #120dB group spoke and Aurelija Aniulyte of GI Denmark was also in attendance as was a member of GI Slovenia.

Summer 2018 saw an increase in street demonstrations, especially in London, organised by or in support of Lennon, with GI activists a visible presence on each occasion. In June, HOPE not hate revealed that Sam Melia, who had stood as a local election candidate for the anti-Muslim For Britain party in May, was a former member of NA and was now active in GI (including attending their March Hyde Park demonstration and April conference).

In August, Dupré quit after the nazi past of key UK GI organiser Tore Rasmussen was discovered by HOPE not hate and revealed in The Observer. The revelation came whilst GI UK were at the movement’s “Summer University” training camp in France, leaving Duprés co-leader Benjamin Jones to run the branch without Dupré or Rasmussen.

In September HOPE not hate revealed that core GI UK activist, Sam Sibbons, was an active member of For Britain’s London branch. In November, British GI members including Sibbons flew to Poland to join a far-right organised demonstration in Warsaw, where fascists from around the world were in attendance. Members also visited the GI-linked ‘Kontrakultur’ centre in Halle, Germany.

In December, despite coordinated efforts amongst continental GI branches to campaign against the signing of the United Nations’ new Migration Pact, GI UK and Ireland were unable to attract much interest at all by comparison. An investigation by Al Jazeera, which aired in the same month, revealed the extreme violence and further extreme views of GI members and associates in the GI-linked Citadelle bar in Lille, France, including members of GI who attended the movement’s summer training camp alongside UK GI members.

2019 started badly for GI in the UK and Ireland, with dwindling press interest, deplatforming by social media, and a majority of its actions being carried out by the same activists. Moreover, in January 2019 the group underwent a split following the creation of the breakaway “British Revival” group.

Since its creation less than two years ago the UK branch has proved something of an embarrassment for the international GI network. That said, despite its many mistakes and setbacks the group has struggled on and now, under the sole leadership of Jones, an activist from the Midlands, the group has stabilised and started to slowly grow again, recruiting new activists and continuing to hold actions.

They have also continued to interact with branches of GI abroad in France and Austria. In April HOPE not hate revealed further links between GI and various members of the anti-Muslim For Britain party, including branch chairs and local election candidates, and in May HOPE not hate revealed that UK GI activists had travelled to the US far-right American Renaissance conference, which hosted members of the extreme US far right, and where they met US identitarian group, American Identity Movement.

In July 2019 disaster struck for UK GI as their choice to publicly host the Scottish antisemitic alt-right vlogger Colin Robertson (AKA Millenial Woes) at their London conference was met with disavowals across Europe by other branches. Despite the hypocrisy – with Austrian identitarians being on good terms with Robertson, for example – at the time of writing, internal messages seen by HOPE not hate indicate that there has been a definitive split and the UK branch will be forced to relinquish the name and branding.

This spiral out of control only underlines the inadequacy of GI in the UK and Ireland, who are far less of a threat than established groups in the network elsewhere. Nonetheless, they are one of the few active far-right groups across the UK and Ireland to be attracting young people and, given the influence of identitarianism on a number of violent terrorist attackers in recent times, they remain a crucial movement for far-right radicalisation.