As European fascists living in Britain play an increasingly active role in the British nazi scene, Matthew Collins investigates the growing presence of the Polish… 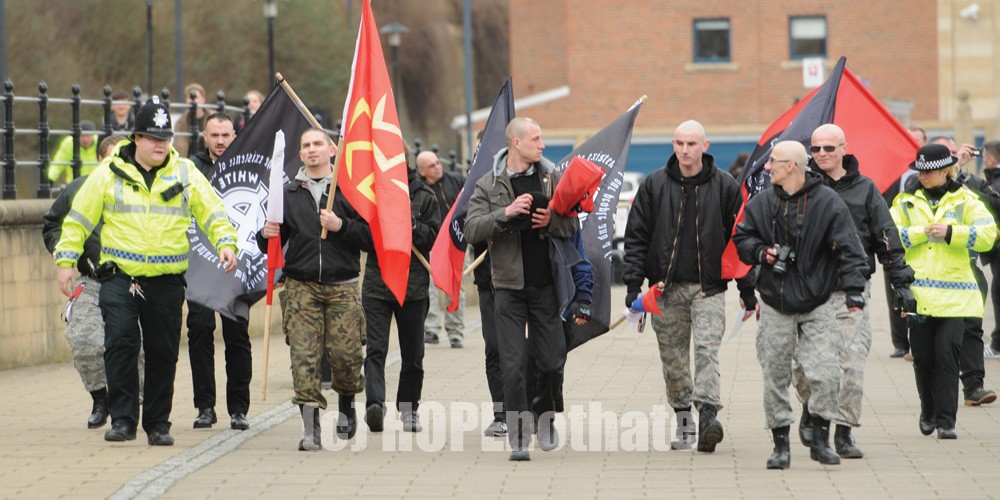 Without a hint of irony, one of the most active far-right groups in the United Kingdom is the Narodowe Odrodzenie Polski (“National Rebirth of Poland” – NOP).

Mainly centred in London, Manchester and the South East, this relatively small group of Polish nazis, fewer than a hundred of them in all, have breathed life into the Blood&Honour (B&H) network and provided much needed muscle in street confrontations between fascists and anti-fascists. British nazi activists, mainly from National Action (NA) and Eddie Stampton’s National Front splinter “New Dawn” are particularly enamoured with their violent and hardline antics.

In June 2015, twenty Polish nazis attacked a free music festival in Tottenham, North London, stabbing an alleged member of a group of Polish anti-fascists that had organised to confront them. The nazi gang had organised under the name Zjednoczeni Emigraci Londyn (United Emigrants of London) but was mainly made up of Polish B&H supporters drawn from NOP’s ranks in London. Police said a man – aged 22 – was arrested for racially aggravated common assault after a later assault on a Jewish man.

Formed in 1981 as an underground movement under Communist rule, NOP is the longest surviving post-war Polish nazi group. Originally a youth movement, in 1992, in its own words for “legal convenience”, NOP registered as a political party. Since 2001, the party has taken part in the electoral process in Poland, polling miserably.

Its website – which also now has an English section for its UK-based members and supporters – calls for the “death” of the “Enemies of the Polish Fatherland.” NOP appears to have become domiciled in Britain after 2010 as some of its youthful members followed the trend of travelling overseas in search of work and adventure.

In February last year, the group featured at London demonstrations that included supporters of the Greek nazi Golden Dawn and the Jeremy Bedford Turner of London Forum infamy. NOP’s most important link up, though, is with National Action with NOP taking a prominent position at the so-called “White Man March” in Newcastle-on-Tyne in March last year where self-styled recruiters from the Ukrainian fascist paramilitary force, the Azov Battalion, were also present. The day ended miserably for them, however, when NOP supporters fought in a pub with rival fascists, coming off second best.

At a “White Pride World Wide” demonstration in Manchester in March, Greater Manchester Police detained a number of its masked members after clashes with anti-fascists.

Last summer, NOP organised a couple of demonstrations of its own. One, attended by both National Action and the Misanthropic Division, was in support of Janusz Waluś, the convicted murderer of the African National Congress’s Chris Hani. Waluś  is currently  serving a death sentence, commuted to life imprisonment, in South Africa. The group has also supported Stampton and Bedford-Turner at their anti-Jewish demonstrations in London.

In keeping with their strict regimen of Jew-hating, heavy drinking and violence, a delegation from NOP was also welcomed to the 75th birthday of the Holocaust-denying Bishop Richard Williamson in London shortly before he was excommunicated from the Roman Catholic Church.

The group’s main contact in the UK appears to be former British National Party high-flyer Kevin Layzell, a bespectacled waif-like figure of ridicule, whom the group appears to have adopted. Layzell had led the group into a police trap in Wigan instead of the disastrous foray by National Action into Liverpool in August.

This seems to have now been forgiven and Layzell remains their main contact and friend on the British far right. At the National Front’s (NF) annual march to the Cenotaph on Remembrance Sunday in November, members of NOP marched with the NF’s splinter group New Dawn, even though the two groups had earlier clashed in a London pub.

Layzell was next part of a small party of English fascists who reciprocated, making a trip to Poland that same month to join the party’s drunken festivities to mark Poland’s national day. As well as representing the National Front, Layzell also spoke on behalf of the teen terror gang National Action and was in Poland for Christmas and the New Year.