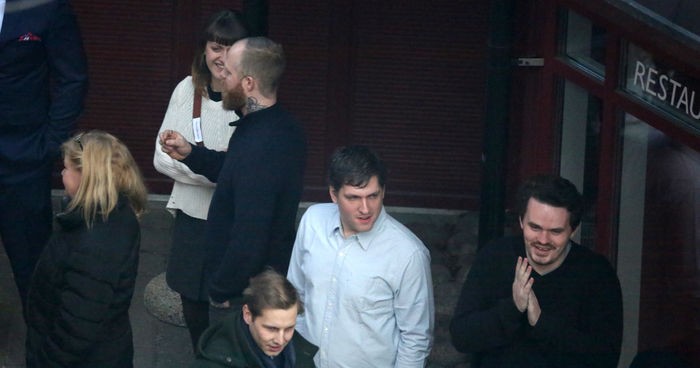 A new international ‘Alt-Right’ movement has been formed, bringing together far-right groups from across the US and Europe. Simply called Altright, it merges the three main alt-right operations in the world and will have a major influence on the far right across North America and Europe.

News of this new organisation emerged at a far-right conference held yesterday in the Swedish capital Stockholm.

In a joint research operation, HOPE not hate and the Swedish anti-racist magazine EXPO sent researchers into the conference and also photographed it from outside.

The Alternative Right is an international set of groups and individuals whose core belief is that “white identity” is under attack by so-called “social justice warriors” (SJW) and pro-multicultural and liberal elites using “political correctness” to undermine western civilization and the rights of white males. Its roots lie in the so-called “Reactosphere” or “Dark Enlightenment” which was a community of bloggers active since the 2000s.

In the UK, the Alt-Right overlaps with the ‘New Right’, a broad alliance of new and more traditional far-right activists, and a contingent from the UK-based London Forum attended the conference. They were joined by members of Swedish far-right groups including Nordic Youth, Motgift and the Nordic Resistance Movement.

Also present was leading “counter-jihadist” Ingrid Carlqvist, who co-runs Dispatch International and until recently was a prolific writer for the US-based Gatestone Institute, which has close links to Donald Trump’s administration. Her presence, in a room full on unrepentant nazis, will severely embarrass and damage claims by the international counter-jihad networks that it is not extreme.

Speakers at the event included Henrik Palmgren from the alt-right platform Red Ice, Magnus Söderman, the former chief ideologue of the openly Nazi Swedish Resistance Movement and Rueben Kaalep who leads the youth movement of the Estonian Blue Awakening.

Jason Reza Jorjani, the editor-in-chief of Arktos books, an alt-right publishing house founded by the Swedish ex-skinhead Daniel Friberg and the American John B. Morgan in November 2009, and now based in Budapest, opened the event by outlining the recent merger of three of the movement’s leading organisations; Arktos Books, Red Ice and the infamous National Policy Institute (NPI) led by Richard Spencer. The new group, Altright, has a single board and an office in downtown Washington D.C.

Also speaking at the event was the Scottish blogger Millennial Woes, recently identified as Colin Robertson from Linlithgow. His short but extreme speech left the audience under no illusions about his belief in racial nationalism. He even quoted the infamous ”14 Words”, a popular white supremacist slogan that states: We must secure the existence of our people and a future for white children.

Conspicuous by their absence were leading US alt-right figures Richard Spencer and Greg Johnson. It was announced at the conference that Spencer had been banned from entering the EU, while Johnson had been due to speak but pulled out at the last minute.

During a period when the Alt-Right has been experiencing infighting and schisms, the amalgamation of the three most substantial and influential groups is highly significant. Importantly, the merger unites a number of previously-linked but separate schools of far-right thought; New Right (Nouvelle Droite), Archeofuturism, the Fourth Political Theory (Alexander Dugin) and the Identitarian movement.

As Jorjani put it at the conference, the merger “represents nothing less than the integration of all of the aforementioned European right-wing schools of thought with the North American vanguard movement most responsible for the electoral victory of President Trump.”

While he dramatically over-estimated their influence as a movement, this merger remains an important development of the Alt-Right and the growing internationalization of far-right politics.

* A full report on the conference, including a detailed list of the individuals and organisations present, will follow shortly.

From Charlottesville to the corridors of Congress
Updates