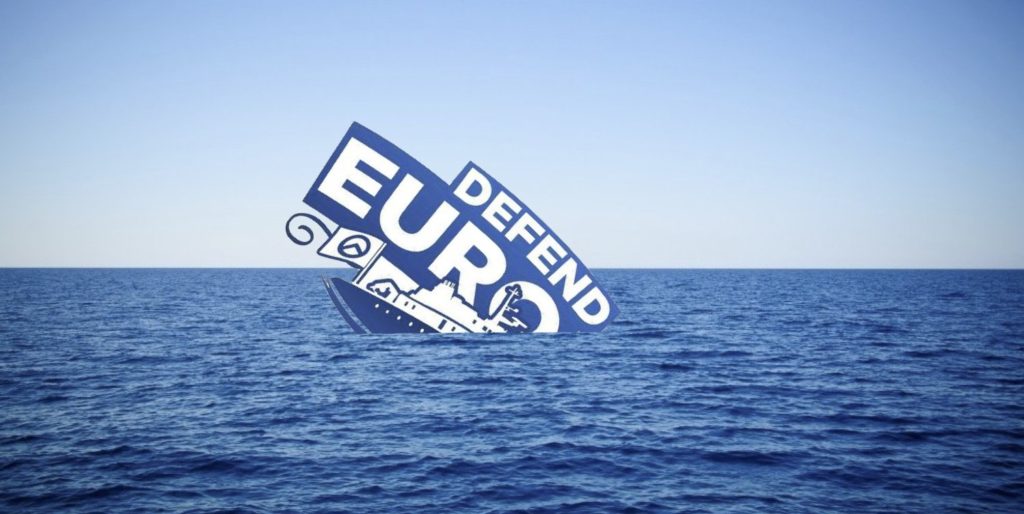 After weeks of costly delays, Defend Europe activists have finally managed to board the C-Star and begin their anti-refugee ‘mission’ in the Mediterranean.

Having spent over a month claiming they would begin their mission in the European port of Catania, Sicily – even summoning international press to the city for a supposed launch on 19 July – international and domestic pressure from NGOs, anti-racist organisations and politicians has forced the extremists into an embarrassing change of plan.

Instead of the choreographed Catania launch in front of the press, Defend Europe activists were forced to leave their base on Gagliani Street in Catania and secretly fly to Cyprus on Friday morning, to join their ship C-Star.

This is just the latest embarrassing change of plan for the mission, which has been plagued by delays and slowed by opposition.

On 16 July Defend Europe received news that its ship was stopped from crossing the Suez Canal.

In a video with sympathising US vlogger and advocate of the “white genocide” conspiracy theory, Brittany Pettibone, Defend Europe said that this was due to HOPE not hate’s investigations (which revealed the strong likelihood that there were private maritime armed security staff aboard the ship, provided by the ship’s owner, convicted fraudster Sven Tomas Egerstrom).

Defend Europe’s activists then went on to describe their eventual passage through the Canal as a “miracle” that required “many bypasses” such as paying “black market prices” to refuel (since port authorities did not allow them to do this).

Following these delays caused by our lobbying and briefings, and pressure from the authorities in Catania, Defend Europe chose instead to anchor at Famagusta port in northern (Turkish-controlled) Cyprus, where the ship’s crew would join the vessel and replace the crew already aboard the ship.

However, soon after their arrival nine crew members, as well as both owner Egerstrom and the captain of the ship, plus Defend Europe activist Alexander Schleyer, were arrested and appeared in court accused of preparing and circulating false documents for 20 Sri Lankan men found aboard the ship, who may or may not have been migrants.

Defend Europe claimed these men were “apprentice sailors” who were merely there to gain experience.

However, according to Faika Deniz Pasha of the Refugee Rights Association, who spoke with the men at the Cypriot airport as they were due to be sent home to Sri Lanka: “They were not seamen and had paid something like €10,000 to be taken to Italy, five of whom went on to seek asylum.”

In a Facebook statement Defend Europe said: “These men were supposed to disembark in Egypt,” yet provided no reason why this did not happen, simply declaring: “It was ultimately impossible”.

In their video with Brittany Pettibone, Defend Europe activists blamed HOPE not hate for many of their problems. Activist Robert Timm said the combination of HOPE not hate delaying their journey and pressure from authorities in Catania meant they had decided to anchor in Cyprus instead. Pettibone herself admitted added that “every single [plan] seems to be thwarted”.

Austrian Identitarian leader, Martin Sellner, also admitted that the work of HOPE not hate, other NGOs and various authorities in closing down port options for Defend Europe had significantly undermined the finances of the project, resulting in extremely inflated refuelling costs.

Along with the “black market” costs in Egypt, Sellner stated in Pettibone’s video that they had had to pay “the highest price ever asked” for fuel in Famagusta.

This funding blow is just the latest in a long line of efforts to defund Defend Europe.

On July 21 crowdfunding site Patreon, took down the accounts of two Identitarian leaders and Defend Europe crew members, Patrik Lenart and Martin Sellner, following lobbying by HOPE not hate and other organisations.

Patreon also took down the account of Lauren Southern, a Canadian alt-light vlogger who participated in Defend Europe’s blocking of the NGO ship Aquarius in Catania on 12 May, subsequently used to launch the group’s crowdfunding and publicity campaign. (Southern has vlogged sympathetically about the mission since then in both Catania and Cyprus.)

Prior to this, HOPE not hate had lobbied for accounts owned by Defend Europe and the Identitarian network – including the Italian Identitarian’s treasurer – to be frozen, to further defund the mission.

This came off the back of a sustained and effective #DefundDefendEurope social media campaign, organised by anti-racist activists including the Sleeping Giants network, that resulted in Defend Europe’s bank and PayPal accounts being closed down.

Unsurprisingly, our work against Defend Europe has resulted in constant attacks from the international far right. Popular alt-right vlogger Black Pigeon Speaks, whose videos include “Why Women Destroy Nations” and “Migrant SEXUAL EMERGENICES plaguing the swimming pools of Europe”, dedicated a video to discussing our role in getting Southern’s Patreon account removed.

British alt-right vlogger Tara McCarthy, who hosts a vlog alongside Pettibone, suggested in a tweet that HOPE not hate should be “infiltrated”. Given HOPE not hate’s success in infiltrating the Ku Klux Klan, we think McCarthy might need a bit of practice before she’d manage that unnoticed.

However, despite long delays, significant climb downs and embarrassing changes of plan, the Defend Europe mission has finally properly started.

On the boat are Martin Sellner, Patrik Lenart, Lorenzo Fiato, Clement Galant and Robert Timm. Identitarian activist Torsten Gorke and an unnamed Czech Identitarian are also likely aboard. Despite claims to the contrary by Defend Europe, the evidence would still suggest that armed private maritime security personnel are aboard the vessel.

According to Pettibone’s video a couple crew members have decided to abort the mission. The activist crew members in her video appeared demoralised, with Robert Timm even stating he had increasing doubts, but was here because “if something went wrong, he would have the feeling he could have prevented it”.

A reckless and dangerous mission

Serious concerns remain over this dangerous far-right project and its possibly illegal plans.

HOPE not hate has produced numerous briefings on Defend Europe, the latest of which lays out in detail which maritime and human rights laws it could contravene should they carry out its stated aims.

If it returns migrants and refugees to the north African coast, as it has repeatedly stated it would do, this could possibly contravene the non-refoulment obligation under Article 33 of the 1951 Refugee Convention, and the spirit of not returning individuals (i.e. economic migrants en-route to Europe) to states where their fundamental human rights are likely to be abused. Defend Europe would, at worst, be directly facilitating the onward transfer of migrants and refugees to detention locations where their human rights would almost certainly be abused.

The use of a vessel by Defend Europe to effectively help the Libyan Coast Guard return those migrants seeking protection and a better life back to Libya, where their fundamental rights may well be abused, should be prevented. It would likely be a breach of this general principle: Libya is not one of the 145 State parties to the 1951 Convention and the UN’s refugee organisation, the UNHCR, was expelled from Libya in June 2010.

Given their past actions and very mission, Defend Europe’s activist crew are also unlikely to treat any persons rescued from distress at sea with humanitarian values, balanced consideration or sympathy. Nor are they likely to have the skill or will to try to differentiate genuine refugees from economic migrants.

We do not know if Defend Europe has adequate medical resources on board the C-Star. When asked whether their vessel would carry a doctor or medical personnel, Martin Sellner “could give no firm undertaking” to a journalist, adding only that: “We will try to have a doctor”. We have no further confirmation of whether a doctor is now aboard.

Failure to render medical support could violate the 1950 European Convention on Human Rights (ECHR), Articles. 2 (Right to Life) and 17 (Prohibition of abuse of rights). In addition, abuse through active neglect for provision of medical treatment to those in need could constitute a breach under Art. 3 ECHR and Art. 5 of the Universal Declaration of Human Rights 1948 (UDHR) where: “No one shall be subjected to torture or to cruel, inhuman or degrading treatment or punishment.”

Breach of such rights may specifically occur in terms of immediate care and subsequent care when landed back in Libya.

Lastly, though Defend Europe has claimed it will not block NGO ships, it has to be extremely careful when “monitoring” these search and rescue vessels to avoid dangerous manoeuvring that could result in vessel collisions. Failure to do so could violate COLREGS, the International Regulations for Preventing Collisions at Sea. (Previously alt-light blogger Lauren Southern had told Buzzfeed News that Defend Europe could use “nets” to foul the motors of other ships.)

The fight against Defend Europe has just begun

We are working closely with NGOs, anti-racism groups and human rights lawyers and will continue to do so. We will be monitoring Defend Europe closely and if the group breaks any laws or engages in any activity that risks lives in the Mediterranean, we will be urging for swift action to be taken.

While we have scored some significant victories in hampering this foolhardy charade, the struggle goes on: we will continue to do everything we can to minimise the harmful effects of this far right, anti-refugee, anti-Muslim mission in the Mediterranean.