Hating, dating, and procreating: online dating and the alt-right 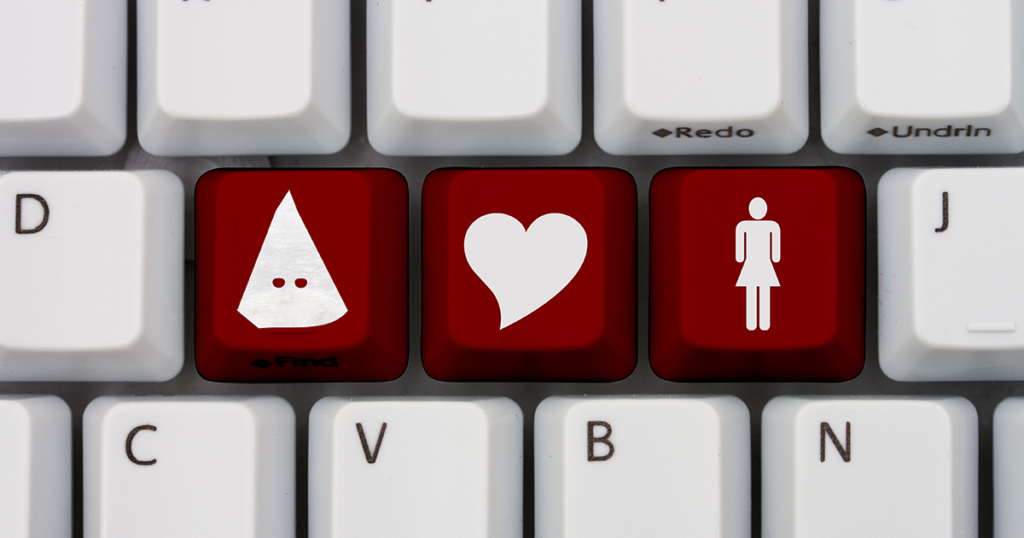 The racist alt-right is, crucially, a movement seeking esteem and status for resentful white men who believe they have been sidelined in modern society. This loose movement holds extreme, toxic and profoundly maladjusted attitudes to gender roles.

Its central uniting belief is that feminism has led women to selfishly prioritise their own autonomy over their duties to the family, neglecting their biological desire to become the “trad wives” (traditional spouses) of “alpha males”.

While a handful of alt-right figures (such as Jack Donovan) have advocated rejecting all female contact and embracing male-only enclaves, most in the movement seek the establishment of ‘traditional’ relationships and the subordination of women in the private sphere – where they can focus on increasing the white birth rate – as central to the restoration of white male pride.

Such jaundiced views are presumably key to explaining the dearth of women in the movement. One of the alt-right’s primary figureheads, Richard Spencer, has estimated that women constitute just one-fifth of the movement’s followers (despite his reported claim that women secretly desire alt-right boyfriends due to their “alpha sperm”).

There appears to be some truth in the longstanding joke on the popular message board 4chan – which has been key in the development of the alt-right – that its users are lonely man-children dwelling in their mother’s basements.

To remedy this, some on the alt-right have turned to online dating sites, infiltrating mainstream services and even creating alternative sites, with the explicit aim of helping those involved in far-right politics bond.

Scottish alt-right YouTuber and agony-uncle to young online racists, Colin Robertson (aka Millennial Woes), recommended the use of dating websites in his ‘Finding a Traditional Wife’ video, in addition to “meatspace” (offline) strategies such as meeting women at church.

To Robertson, while judging people “like a product” would have once seemed abhorrent, in the 21st century internet dating is “a reality and it’s simply a means to an end”.

Some on alt-right message boards recommend meeting “normie” [normal and politically mainstream] women on dating sites and “red pilling” them over time, i.e. convincing women – who they generally deem to be more intellectually naive and pliable – of their patriarchal and racist beliefs.

Of course, it is difficult to gauge how many white nationalists are hiding their beliefs on mainstream sites with the intent of manipulating women in this way.

Robertson, however, recommends users should be “explicit” and “shameless” about their intentions, and believes that “certain female instincts are triggered” by being frank about desires for traditional relationships, which is why “Muslims have an advantage over white men” in dating.

A few cursory searches of “alt-right”, “white power” and “national socialism” on Plenty of Fish (POF), a popular dating website with over 150 million users, yields pages of profiles of out-and-out racists – overwhelmingly men – wearing their beliefs on their sleeves, many showing off their nazi tattoos and flags.

Popular apps such as Bumble and OkCupid have taken steps to crack down on white supremacy and abuse on their platforms. Most notably, Chris Cantwell, an alt-right nazi now infamous for his role in the August 2017 ‘Unite the Right’ rally, was banned from OkCupid due to his beliefs.

Cantwell has been open about his prolific attempts at online dating, including articles such as ‘8 Online Dating Tips for the Ladies’, which includes advice such as “Your boundaries are complete bullshit” and “if all I can see is your face, you’re a fat girl.”

“I used to meet women from chat rooms, and no matter how many disasters I run into from this habit, I just keep on trying,” he wrote in a now-deleted post.

In alt-right dating profiles, a caustic resentment of women and minorities is often front and centre.

On the Daily Stormer, the noxious nazi website which bans women from using its forums, one user complained that the online dating service Match.com banned his profile, which contained the charming lines:

“are you done being a degenerate whore? […] Hopefully you don’t have a history of sleeping with brown people, because that’s disgusting. You must realize Jews are a fundamental problem in our society”.

In addition to genuine attempts to find women, there are whole threads on the Daily Stormer forums gloating about using mainstream dating sites purely to racially and sexually abuse genuine users through fake profiles.

A common complaint from far-right activists is that mainstream online dating sites are too “progressive”, unfairly favouring women or encouraging miscegenation and the breakdown of white families.

Others complain that women encountered on dating sites are unlikely to desire “traditional” relationships. In the opinion of one Daily Stormer user:

“any woman who has to resort to internet dating (besides getting fucked on tinder) is broken and most likely insane”.

As an alternative, some on the far-right have turned to creating their own dating services, another development in the ongoing project of creating a parallel internet, where users hope to connect around their shared political beliefs, ensconced from censorship and the eyes of outsiders. Such sites aim to facilitate extremist networking, and, as Lorraine Bowman Grieve of the Watford Institute of Technology has pointed out, “the fostering of personal relationships with others involved within extremist movements has been identified as a contributing factor toward increasing involvement over time”.

Popular among some in the alt-right is Trump.Dating, which aims to help supporters of US President Donald Trump “find the America First partner of your dreams”, holding that “patriotic and political viewpoints” can be “a base foundation” of relationships. Whilst the site itself does not openly endorse the alt-right, and forgoes open racism or extremist politics, it has also been slammed after it featured a convicted sex offender as a model on its homepage, and is designed to exclude LGBT+ people; the two categories upon signing up being “straight woman” or “straight man”. Evidence of its use by the far-right is quickly found in usernames such as “Whitesonly”, “Kkkatie” and “1488NEVERFORGET”.

Hardline racist dating sites associated with open fascists have existed for more than two decades. An early and now-defunct “White Pride” service was Eurodatelink, marketed as for  “normal White people of European descent”, advertised its services on the website of American neo-Nazi group National Vanguard. Another, Aryan Dating Page, offered its services to “heterosexual, white gentiles only”, and had the profiles of racists from all over the world. Both of these sites are now defunct.

According to Les Back, Professor of Sociology at Goldsmiths, Aryan Dating Page was kicked off its internet server in 1998, and has since been incorporated into Stormfront, the web’s first major hate site run by a former Alabama Ku Klux Klan boss, under its “White Singles” subforum. Stormfront remains one of the most significant online meeting points for racists seeking romance. In this section of the website there are two sub-categories, “Dating Advice”, which currently has almost 60,000 posts, and “Talk”, which has upwards of 99,000. Here users post lonely hearts ads, share pictures and links to other dating sites (Eurodatelink, for example, was first advertised here in 2001).

WhiteDate is a more recent and equally racist service, which now has upwards of 950 members. Use has been encouraged by prominent figures in the British far-right, and profiles include familiar names to those following the British fascist scene. Unlike WASP Love, which is more marketed towards far-right Christians, WhiteDate is more open to far-right paganism, a popular belief system among many white nationalists.

A profile on WhiteDate.net

However a central and fundamental issue remains; the users are overwhelmingly male. Stonewall, the founder of WASP Love, told VICE that his service needed to “beef up the female members”. Roughly 80% of profiles on WhiteDate are male, and the site has even resorted to establishing section on its website entitled “How to Invite Women to WhiteDate”, complete with its own printable flyer. The site has also ran adverts on Reddit, targeted at women (Reddit has since removed the adverts). White Date seeks to explain such a disproportionate following: “Men are vanguards and it is reflected in the ratio between men and women on WhiteDate”.

The issue is brought into focus by alt-right YouTuber Tara McCarthy. Visible female figures in the alt-right have attempted to carve a niche for themselves by offering pep talks and dating advice to the movement’s lonely adherents. McCarthy took this a step further, setting up her own alt-right dating Facebook group, “Alt Right Singles (Seeking Marriage) w/ Tara McCarthy”, although in the nine months it has been up it has only attracted 89 members, mostly men, and is now inactive. McCarthy was at the centre of the so-called “Tradthot” scandal in the movement in December 2017, where female figure in the alt-right were mercilessly harassed by sections of the movement for not upholding the “traditional”, patriarchal values they profess to hold. McCarthy appears to have taken a less active role in the alt-right since the scandal.

Tweets from Tara McCarthy, as reproduced by Salon

A key facet in the alt-right’s notions of masculinity is the “sacred mission” of defending white homelands, and countering the perceived demographic change (or “white genocide”) of European and North American populations, by starting highly-idealised white families and producing white children. However, the stark misogyny and degradation of women routinely expressed by sections of the alt-right undercuts any pretensions to (a likewise sexist conception of) chivalry and, apparently, dissuades the involvement of many women.

The alt-right, a loose jumble of far-right ideologies, came into being due to the fact that internet has enabled far-right activism beyond traditional, organisational structures. Activists in the alt-right can be utterly isolated from others sharing their views away from a computer screen. This loneliness and anger is brought home in depressing fashion by spending time on alt-right dating sites.