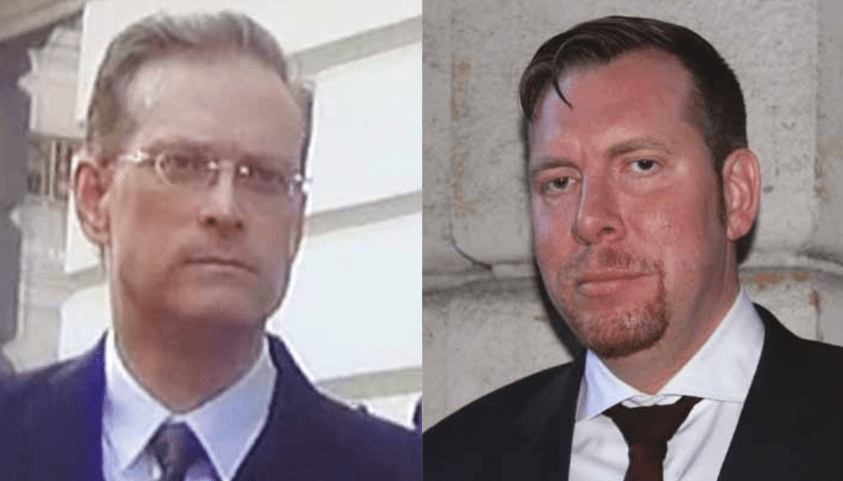 The feud that has been rumbling on at the very heart of the white nationalist alt-right between Greg Johnson (pictured above left) and Daniel Friberg (pictured above right) – the respective heads of the central publishers of the alt-right, US-based Counter-Currents Publishing and Hungary-based Arktos Media – has again erupted, with accusations of grooming, doxing, alcoholism and criminality being levelled.

The feud reignited after a recording surfaced of Greg Johnson conversing with the blogger Francis Nally (AKA ‘Pilleater’). Johnson has long faced speculation about his sexuality from the deeply homophobic alt-right, and the recording was interpreted by Johnson’s enemies as, in the words of Richard Spencer, exposing a “secret homosexual cabal within the Alt-Right that [Johnson is] a part of”. Matt Forney, the manosphere racist and an ally of Friberg, broadcast sections of the recording on his podcast, and claimed that Johnson “wants white people to survive because he wants to have an infinite supply of 15 year old boys to rape”. Johnson has claimed the accusations that he is leading a “grooming gang” are “appalling”, “untrue” and “insane”.

Johnson subsequently claimed, in a tweet aimed at Spencer and Friberg, that “The US and Nordic Alt Right are run by a mafia of alcoholics & their enablers. Pot, cocaine, meth, & other illegal drugs, as well as adultery, cuckoldry, wife-beating, doxing, & embezzlement are also indulged in & enabled”. Johnson also accused Friberg of doxing Fróði Midjord, organiser of the Scandinavian alt-right Scandza Forum, in 2017, allegedly due to the fact that Friberg was not invited to the 2017 Scandza event in Stockholm. Johnson also accused Friberg of being “an antifa informant” and a “traitor to this movement”.

Friberg responded by publishing screenshots allegedly from a two-year old private conversation between himself and Mike Polignano, the Counter-Currents co-founder and current Webzine Editor of the outlet. The screenshots purport to show Polignano telling Friberg that Johnson had “locked [him] up in a mental hospital” after he suffered a “mental breakdown”, and that by telling psychiatrists that Polignano had “no justification” for having the loaded gun he kept in their shared house, Johnson contributed to Polignano being committed against his will. The screenshots also appear to show Polignano claiming that he relinquished his Counter-Currents shares to Johnson when he was “not sound of mind”. Johnson has yet to publicly respond to the allegations.

The extraordinary accusations come over a year after the feud initially flared up, after Friberg accused former Editor-in-Chief of Arktos, John Morgan, of attempting a hostile takeover with the help of Johnson. During this time accusations were also leveled at Friberg, accusing him of having embezzled money from Arktos. Morgan has since left Arktos to join Counter-Currents.

The rift constitutes a major dividing line in the alt-right. Whilst some leading figures have tried their best to remain impartial, Johnson is forcing figures to take sides, claiming that “I will not deal with people who deal with Friberg and Forney. I will not do business with people who do business with Friberg and Forney. I cannot, in good conscience, have anything to do with them. They are just cancer, they are just poison, and they are so dishonest. And all their little fanboys, and their enablers, I’m declaring war on you too.” Marcus Follin (AKA ‘The Golden One’), for example, who remained neutral during the initial split, has claimed Johnson’s accusations are “vicious lies”. The mudslinging is likely to impact Counter-Currents more severely, in part due to the rampant homophobia of the white nationalist movement. Not least, it is likely to cause the outlet to haemorrhage donations at a time of financial need (the row comes on the back of many of Counter-Currents’ titles being removed off Amazon), and could also see the departure of Polignano, following Friberg’s leaking of the purported messages.

Visitors to Counter Currents has also continued to drop since its peak after the disastrous Unite the Right rally in Charlottesville in August 2017, reflecting the difficulties the movement as a whole has had since the event. Johnson has, since the rally, sought to distance himself from the the “alt-right” label, but is still mired in the quarrels and feuds of the movement.


The squabble could also impede Johnson’s efforts to work more closely with the wider European far-right, something he has been keen to do. Johnson has made multiple recent trips to Europe to speak alongside, in particular, members of the Ukrainian neo-nazi organisation, Azov Battalion, in some cases alongside fellow members of the US alt-right. This feud could also, therefore, cause those in the US similarly attempting to cooperate with the international far right to cut ties with Johnson and Counter-Currents, if they judge that association with him and his organisation could damage their own reputation in this regard.