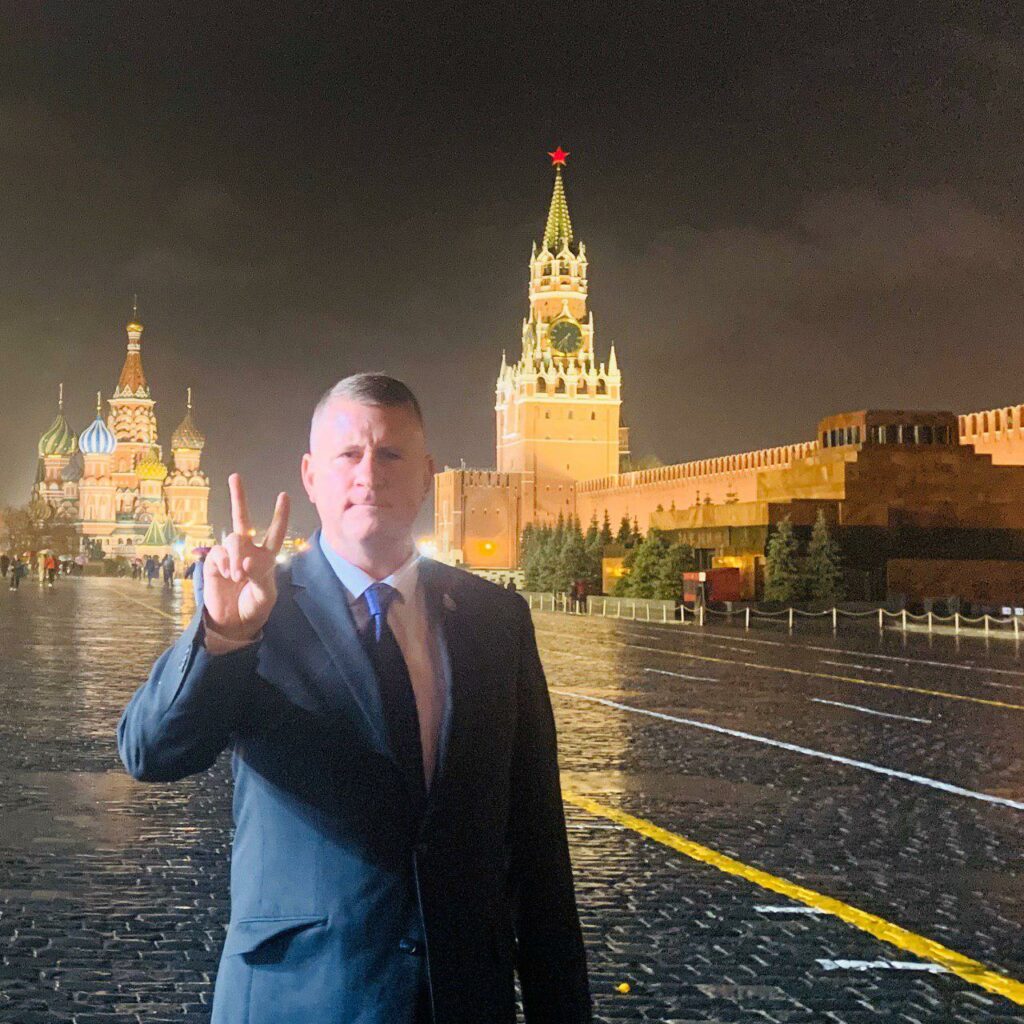 Since Russia’s bloody invasion of Ukraine, many on the far right who had spent years venerating President Putin have suddenly sought to distance themselves the Kremlin. The anti-Muslim group Britain First, for example, has been accentuating the fact that its main Russian links are with an opposition party called the Liberal Democratic Party of Russia (LDPR).

As the group hurriedly posted on Telegram in February: “Our friends in Russia are an OPPOSITION party to Putin, the LDPR. The LDPR are a patriotic, nationalist party that has nothing to do with Putin or his United Russia party. Britain First has only ever visited Moscow to see our friends, the LDPR”.

The LDPR is often described as part of the “controlled opposition” or “systemic opposition” and, according to the BBC, “The party does not tend to criticise either Mr Putin or Mr Medvedev explicitly.” However, a HOPE not hate investigation has found that Paul Golding and Britain First’s links to Russia and support for Putin go far beyond what they are now claiming.

Paul Golding is the co-founder of Britain First and the group’s current leader. Formerly a prominent activist in the British National Party (BNP), Golding has been imprisoned for religiously aggravated harassment in 2018, then received a suspended sentence for publishing written material intended to stir up hatred and was convicted under the Terrorism Act in 2020. In 2019, a recording emerged of him admitting to having violently attacked his female former deputy leader Jayda Fransen.

HOPE not hate can reveal that Golding has visited Russia at least three times on behalf of Britain First. The earliest two trips came in 2019, first in June and again in October, with a third trip a year later in October 2020.

The first trip, in the summer of 2019, saw Golding, accompanied by Sam Cochrane and Andrew Edge, attend a gathering of far-right figures from around the world. The “International Conference of Peace-loving Forces” was organised by the LDPR and was attended by extreme figures such Bartosz Bekier of Falanga in Poland, Karl Richter and Florian Stein from the neo-Nazi German National Democratic Party and Kimura Mitsuhiro from Issuika in Japan.

Golding gave a short speech to the gathering in which he made his thoughts on Putin very clear: “I am a great admirer of President Vladimir Putin and what he has achieved for your sacred motherland. […] I applaud President Putin for condemning Western liberalism at the G20 summit last week.”

He also criticised how the West:

“subject Russia and President Putin to an avalanche of lies, distortions and economic pressure to turn Western populations against Russia, which is our natural ally. The propaganda war against President Putin and Russia is the same diabolical pressure that our movement, Britain First, and many others, have been subjected to. Smear campaigns, character assassination, false criminal charges, media lies and poison, these are the weapons the globalists use against our sacred and noble cause.”

Golding then finished his speech by once again “praising and applauding the patriotism of the Russian people and your President, Vladimir Putin.”

Similarly, the New York Times spoke to a source who claimed to have had a dinner with Golding and fellow far-right extremist Stephen Yaxley-Lennon (AKA Tommy Robinson), during which they discussed how to move money to Russia. NYT’s source claimed that “Golding had already opened accounts there linked to his far-right group.”

Later in 2019, Golding returned to Moscow, this time with his partner Ashlea Simon and Britain First’s Communications Officer Tim Burton. The trip was written up by Burton in a punishingly detailed diary that has decidedly creepy sections where he talks at length of his attraction to Russian women, and claims that Simon has a “sylph-like figure that would be the envy of many a catwalk model.”

While in Moscow they met with Edward Chesnokov from the Komsomolskaya-Pravda newspaper, who subsequently set up a TV interview for Golding on the state-owned news channel Russia-24. Golding hit all of his usual talking points, praising the freedom and openness of Russia while condemning Britain’s supposedly totalitarian police state, multiculturalism and political correctness.

The main purpose of their trip was supposedly to meet again with the LDPR, who provided them with a tour around the Duma before welcoming them at their office on Basmanny Lane, where they discussed how “we in Britain First could work together with the LDPR. It was agreed that we should keep in touch, meet regularly, and explore ideas leading to mutual co-operation.” Golding then handed the LDPR representatives signed copies of his own book.

It was on their return from this trip that Golding was arrested and questioned by SO15 counter-terrorism police at Heathrow airport. He was charged and subsequently convicted of an offence under the Terrorism Act after he refused to provide the police with access to his digital devices. Interestingly though, Burton’s diary of the trip states that police asked “Were there any financial transactions carried out involving Britain First finances?”, suggesting that the police were seeking to find out more about the widespread rumours of Golding’s hidden Russian money.

Of all Golding’s trips to Russia, we know the least about his third in October 2020. As with his previous visits, he placed a Britain First poppy wreath at the Tomb of the Unknown Solider at the Kremlin, this time accompanied by their South East Regional Organiser, Geoff Miles.

Golding also did a series of media interviews. In one broadcast interview he parroted the same lines as on previous trips. He called for greater Anglo-Russian cooperation and argued that the reason for Western sanctions against Russia is that it is a: “proud, traditional country, that kind of thing, they don’t like it in the western world. So, they’re constantly trying to portray Russia as some kind of violent dictatorship that’s a threat to Europe and the West, which it is not. We are kindred peoples.”

Later, in January 2021, Britain First posted, but later deleted, a message on its Telegram channel reading: “Russian opposition Alexey Navalny has been detained by police, however the British and American mainstream media fails to acknowledge he has been detained for breaching the terms of his probation from a previous criminal case & are instead using it as a chance to attack Putin…..”.

However, Goldings’s denial of Russian involvement in the Skripal poising, and defence of state persecution of Navalny, is just part of his wider pro-Putin propagandising. Just weeks before the Moscow trip in 2020, but years after the horrifying chemical attacks in Syria in 2018, Britain First posted on Telegram: “God bless Syria and Russia. Assad and Putin has stood for the 100,000’s of persecuted people in Syria at the hands of the Islamic State…..”

However, most damaging for Golding, in light of the current war, is what he said during the Federal News Agency interview when asked about situation in Ukraine in 2020, prior to the current Russian invasion:

“I think that throughout the last hundred years a lot of artificial boarders have been made around Europe and one of those artificial boarders was to include the Donbas region, which is populated by ethnic and cultural Russians, historically as well, and the Crimea […] and I don’t see why the Ukraine is holding on to areas that are populated with Russians so determinedly. […] So places like the Crimea, places like the Donbas, that are populated by Russian people, should be part of Russia.”

Interestingly, at roughly the same time as this interview, in October 2020, Britain First’s Telegram channel shared an article titled: “Time to defund NATO? Defending the West from Russia is so ‘last century’.”

Far from Britain First’s claims to have only really been involved with an opposition group in Russia, it is clear that Golding’s links to the country are deep, as is his commitment to spreading Kremlin lies and misinformation. The question is: why?