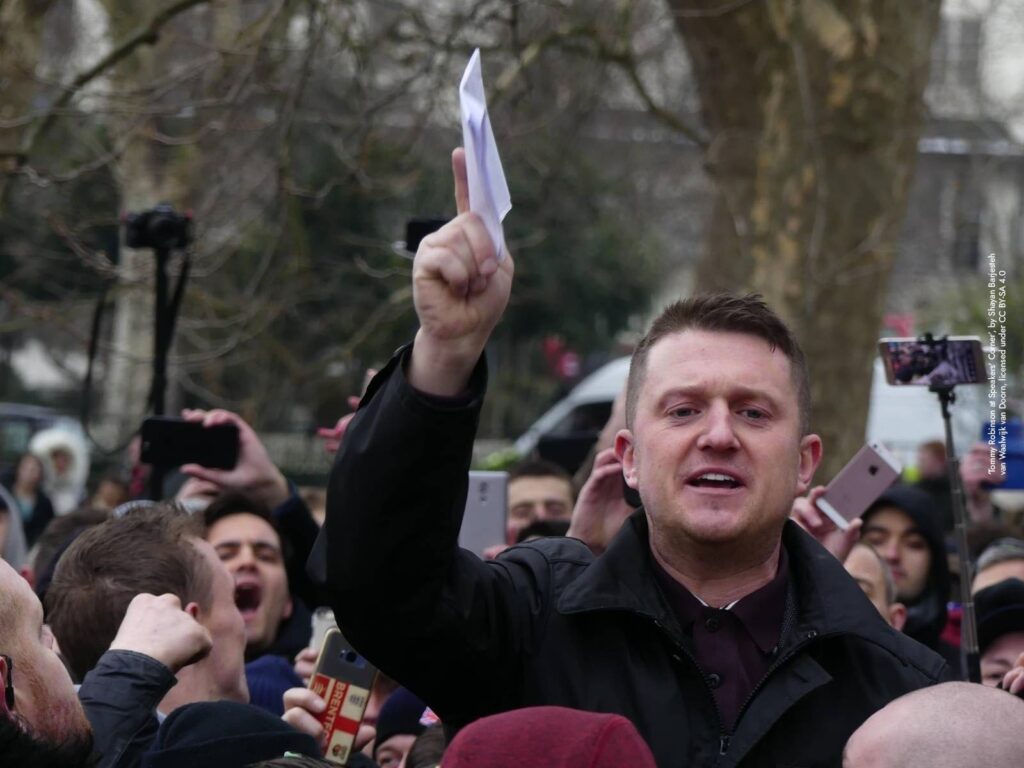 Stephen Lennon, better known as Tommy Robinson, will appear at the High Court later today for a contempt of court hearing after he failed to attend a hearing in the Jamal Hijazi libel case in late March.

Lennon has been quick to question the timing of the case, suggesting that today’s hearing is a deliberate attempt to disrupt the next installment of his Rape of Britain series, which is due to be aired at a demonstration in Telford tomorrow. Lennon has regularly complained to his supporters that this is another example of the persecution he is facing at the hand of the State.

He has also tried to portray the on-going investigation into his alleged bankruptcy as unprecedented and even illegal. Lennon has tried to claim that because he came out of bankruptcy on 3rd March, a year after he declared himself bankrupt, he is no longer liable for the debt he incurred beforehand and his debt should now be written off.

He has also repeatedly complained about Hijazi’s lawyers triggering Section 71 of the Bankruptcy Act, which allows them to quiz him in court under oath about his finances and the validity of his bankruptcy. He has told his supporters that this tactic has “never been used before” and “totally unheard of”. While it is certainly true that this is a rarely used legal manoeuvre, it has certainly been used before and, given that it is provision in the Insolvency Act, it is clearly there for lawyers to use.

Lennon has also been moaning about his mounting legal costs, which are likely to have added another £50,000 to his debt even before today’s High Court hearing due to court hearings in February and March. Once again, he sees this as lawfare, the concept that his opponents are trying to tie him up in so many legal problems that it hampers his political work.

Of course, Lennon’s complaints are all nonsense and the legal difficulties he is currently facing are all of his own making. Lennon is in the High Court today simply because he failed to turn up at a court hearing on 22nd March. If he had attended that hearing then he would not be facing the possibility of jail today.

Lennon told his supporters that the judge knew he was not going to attend because of the difficulty of finding a lawyer but unfortunately he cannot just cancel a court case on his own volition. The fact that Lennon flew to Spain the day before the hearing and returned a few days later suggests that he was reducing the possibility that he might be immediately arrested for non-attendance.

His repeated assertions that Section 71 of the Bankruptcy Act should not be used against him must also be dismissed. There was extensive legal argument at an earlier court hearing in February over whether this provision in the law could apply in this case and the Judge, in a very long and thorough judgement, ruled that it could. Lennon once again did not attend the hearing. As the judge made clear in court, Lennon’s non-attendance meant he waived his chance to oppose Section 71 being applied.

However much Lennon might continue to say that Section 71 does not apply to him, his non-attendance means that it is being applied and there is absolutely nothing he can do about it.

Lennon’s complaints about the ongoing investigation into his bankruptcy is also completely wrong and suggests that he is either deliberately fooling his supporters or has a poor understanding of the law. While it is true that he has come out of bankruptcy, this has no impact on the on-going investigation into his finances. Boris Becker’s imprisonment last week after being found guilty on four counts under the Insolvency Act shows that people can be legally held to account years after their bankruptcy.

It is also important to debunk the notion that the date picked for the hearing was conceived to disrupt his Telford demonstration. Having sat through numerous court hearings where judges and lawyers scramble through their busy diaries to find available dates that work for them, I really cannot see how these dates can be contrived to inconvenience the defendant.

Lennon also has no grounds to complain about his mounting legal costs. On the first occasion, in February, the judge ruled in favour of Hajazi’s legal team applying Section 71 of the Insolvency Act, a move that was made all the easier because Lennon, or a legal representative, was not present to argue against it. While the costs for the March hearing will be determined in May, the judge has already indicated that it is he will award costs against Lennon for non-attendance, though it is still to be determined whether these costs are just added to the existing debt or whether they are outside the bankruptcy and so retrievable from his post-bankruptcy earnings.

Stephen Lennon faces possible prison today simply because he has deliberately and quite consciously refused to pay damages and court costs to Jamal Hijazi and because he did not bother to turn up to a court case he was obliged to attend. No amount of excuses or blaming others can detract from this fact. While it is unlikely that Lennon will be sent to prison, despite having been found in contempt of court twice before, his legal problems are quite simply of his own making.

As Lennon prepares for court, he would do well to reflect on the words of Alex Jay, the head of insolvency and asset recovery at the litigation firm Stewarts, who said in the aftermath of Boris Becker’s conviction: “Make no mistake, being found guilty in a criminal court of bankruptcy offences is quite rare. Most people, when bankrupted, cooperate with the bankruptcy process, at least to a degree that doesn’t result in criminal charges being brought and proved. The level of Mr Becker’s attempts to frustrate the process, and avoid repaying his creditors, must therefore have been quite exceptional.”

Lennon is treading the same path as Boris Becker. He could find himself facing the same legal consequences as a result.

What happened in Parliament last year?