A New Threat? Our report on Generation Identity UK and Ireland

Generation Identity United Kingdom and Ireland (GI UK and Ireland) is the domestic branch of an expanding far-right network, active in 13 countries across Europe and now in North America. The movement is best known for the dangerous Defend Europe mission, which sought to block refugee rescue ships in the Mediterranean in the summer of 2017.

As a movement they have a long history of racism and extreme anti-Muslim prejudice, and push ideas such as racial separatism and repatriation.

Known for its headline-grabbing stunts and bold iconography, GI UK and Ireland is young, organised, tech-savvy and very active, all of which belies its extreme ideology.

GI’s current crop of activists have been drawn from organisations across the British far right, ranging from the now-proscribed neo-nazi terrorist organisation National Action, to London’s Traditional Britain Group, all the way to elected UKIP officials.

This HOPE not hate mini-report explores this new organisation in the UK and Ireland, explaining what it believes, how it operates and who is involved. 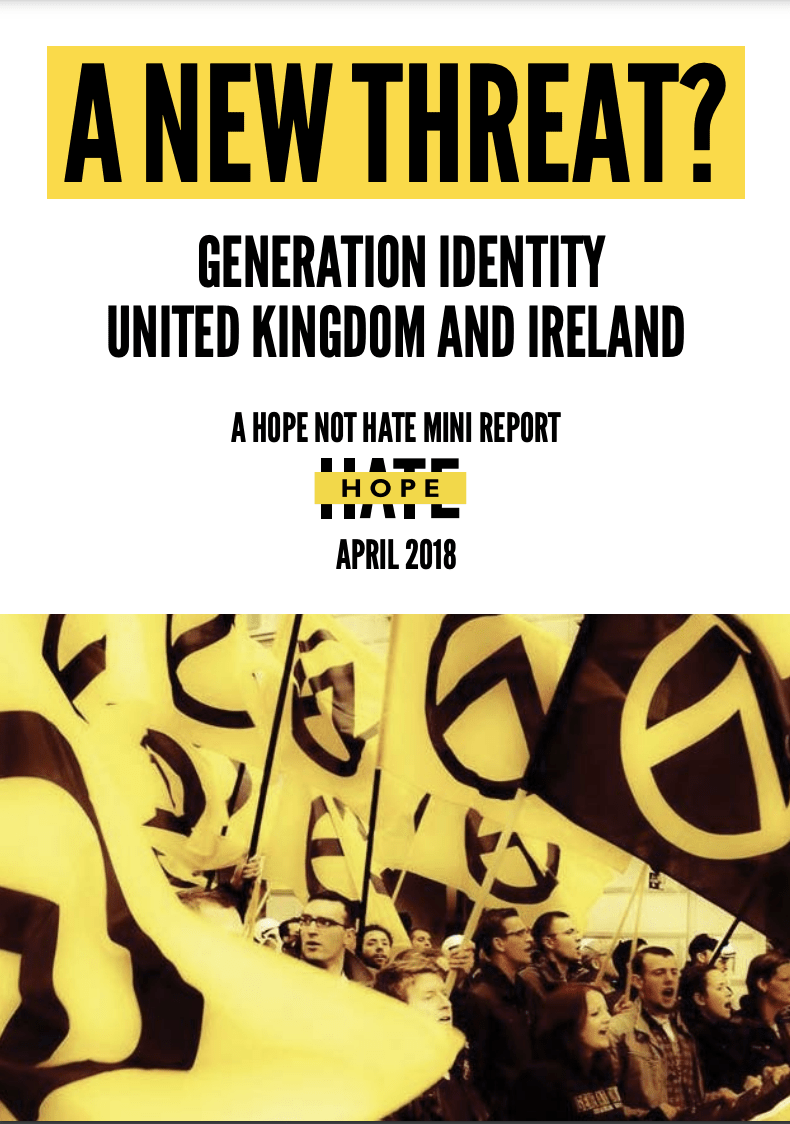 The Threat in Perspective

It is important to keep the threat posed by GI UK and Ireland in perspective. Though unwise to judge impact purely on size, the group has, so far, mobilised just a handful of committed activists. Its first major demonstration, held in Hyde Park last month, attracted just 40 people. Across GI UK and Ireland’s social media accounts it has just 7,445 followers on Twitter.

At present, the UK operation remains a pale imitation of its more established continental operations in France, Italy, Germany and Austria, which have dozens of active branches and a significant infrastructure – including gyms and bars – in place.

While leading figures such as Martin Sellner of GI Austria have dedicated considerable time and effort into getting things moving here – seeing the UK as the movement’s gateway to the Anglosphere – Britain has proved a difficult place for GI to operate, facing organised and concerted opposition at every turn.

The official launch of the UK branch in October 2017 proved to be something of a disaster; its banner drop at Westminster received only cursory media coverage, and shortly after came the revelation that the small group had been infiltrated by an ITV documentary crew, with the help of HOPE not hate, meaning we had known all their plans from the off.

The exposé, which showed Sellner using a racist epithet, subsequently saw the then-UK co-leaders Jordan Diamond and Sebastian Seccombe panic and distance themselves from GI, an act that has seen them sidelined ever since.

Two cancelled speaking engagements with UKIP’s youth wing, the government’s decision to refuse Sellner entry into the UK, HOPE not hate’s recent exposé that a GI activist had been a member of the banned neo-Nazi terrorist organisation National Action, and evidence of tensions and emerging splits in the Irish GI branch, are all further evidence that the British Isles is proving a hard place for GI to do business.

However, this is not a call for complacency. GI UK and Ireland does pose a threat that needs to be understood, not least to make sure it fails to grow as its counterparts on the continent have done.

Despite its small numbers, GI has quickly become the most active far-right group in Britain. Since the start of its activities in July 2017 the group has carried out at least 92 actions and meetings, averaging over two a week. It has been active in London, Manchester, Portsmouth, Luton, Newcastle, Birmingham, the Lake District, Telford, Belfast, Solihull, Oxford, Ely, Wrexham, Belfast, Glasgow, Edinburgh, Greenock, Falkirk, Dublin, Balbriggan and Lisdoonvarna.

While there was a significant drop in activity following the embarrassing ITV exposé, since the Norwegian Tore Rasmussen took over the UK operation there has been a significant upturn in activity.

Actions have ranged from small stickering and leafleting sessions and delivering letters to officials, to raising GI flags and dropping large banners. GI also holds regular ‘study circles’ where activists discuss key identitarian texts, such as Guillaume Faye’s Why We Fight: Manifesto of the European Resistance. Faye is a French writer associated with the postwar fascist movement, the Nouvelle Droite (New Right).

GI has also bought its central tactic of staging eye-catching stunts to the UK. In December last year, one activist dressed as London’s Muslim mayor Sadiq Khan, accompanied by two people in niqabs, then went to Westminster Abbey and Saint Paul’s Cathedral and asked people to sign a petition to ‘ban Christmas’.

GI has also adopted the controversial tactic, first used by Bloc Identitaire (the organisation from which Generation Identity developed out of in France), of handing out ‘warm pork suppers’ to homeless people with a view to excluding Muslims.

GI’s more ‘respectable’ appearance, slick social media work, distinct iconography and disciplined public face masks an extreme ideology. The core beliefs of GI, such as ‘ethnopluralism’ and ‘remigration’, are far more extreme and race-based than anything posited by groups like the English Defence League (EDL).

However, the veiled and eye-catching means by which the group presents its ideas has paid dividends; for example, when Breitbart London took the extraordinary step of printing in full a speech written by Austrian GI leader, Martin Sellner. The danger of GI lies in its potential to normalise an ideology, which has ethnic separatism at its core.

GI’s tactic of leafleting around the edges of Lennon’s recent Hyde Park speech and the Football Lads Alliance (FLA) demonstration in Birmingham in March is allegorical of the potential ideological impact of the group.

While by-and-large rooted in racism, the UK anti-Muslim movement has ostensibly been more concerned by abstract notions of ‘culture’, rather than the more racialised concept of ethnic identity forwarded by GI. Should GI get a foothold here this could begin to change.

Of most concern is Lennon’s increasing cooperation with the international GI network, resulting in talk of his formal involvement in a leadership capacity in the UK. While this would forever undermine his claims that he is not a racist, Lennon’s involvement would result in a dramatic metastasization of GI, bringing large numbers of his followers into contact with GI’s extreme ideas.

It would be unwise to exaggerate the threat posed by this fledgling group, but we do need to understand the nature of it. That is why this new HOPE not hate mini-report seeks to accurately reflect the true nature of GI’s ideology and highlights how active it has already become. 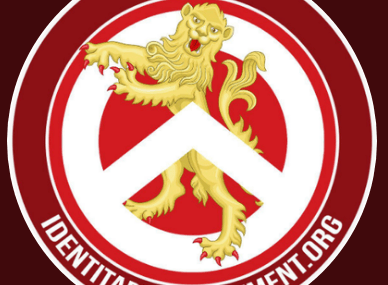