Britain First and the police: a love-hate relationship 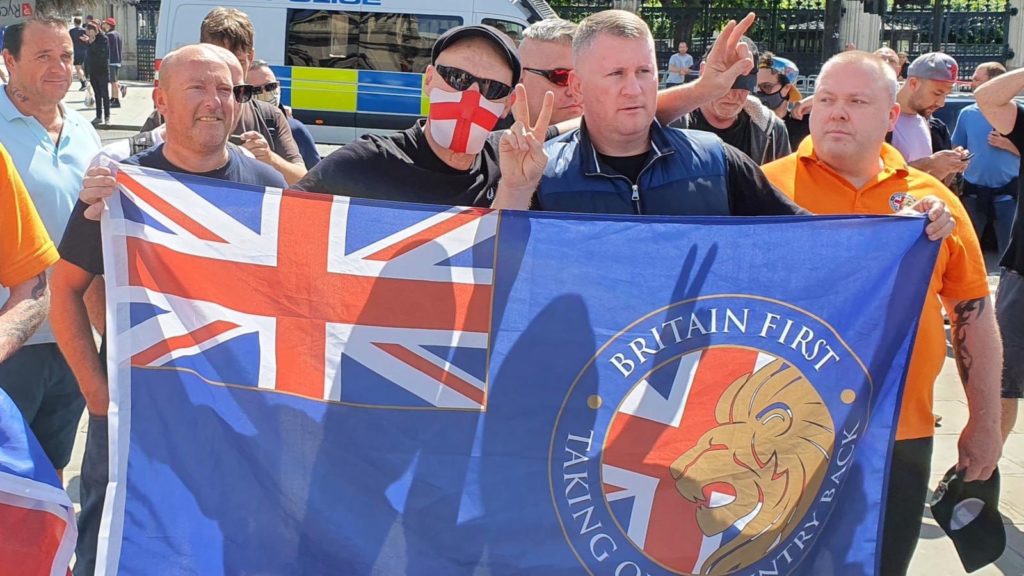 On 7 June, Britain First shared a mawkish post by far-right activist Jack Dawkins with the caption: “I stand with law enforcement and their families”, prompted by the violence that had broken out at the previous weekend’s Black Lives Matter protest.

But do Britain First really stand with law enforcement? The behaviour of their supporters at Saturday’s protest and Paul Golding’s statements about it would beg to differ.

Britain First has something of an identity crisis. On the one hand, they’d like to portray themselves as decent citizens, god-fearing Christians and supporters of law and order. A key part of their campaigning is based around the idea that minority groups, in particular Muslims, are lawless and uncontrollable, an affront to the law-abiding population like themselves.

But this messaging is somewhat undermined by the fact that their movement is steeped in hooliganism and violent disorder, and their leadership seem to have considerable difficulty in remaining within the law themselves.

This dichotomy makes their social media channels quite confusing at times. On 9 May, Britain First shared a video on Telegram of a group of Asian teenagers mocking a policeman after he instructed them to observe social distancing, adding the caption “the youth of today have no respect for authority”.

Yet Paul Golding has himself been convicted under anti-terror laws for refusing to comply with police instructions, in his case to hand over the codes for his mobile phone and laptop when required.

Furthermore, Britain First have repeatedly shared images of their own activists failing to observe social distancing, and only called off a mass demonstration in May when threatened with prosecution. It seems that disobeying lockdown measures and following police orders is only problematic if the perpetrators aren’t white.

Two of the people seen with Paul Golding in a video uploaded by Britain First at the start of Saturday’s protest are clearly identifiable on the front lines of some of the worst disorder of the day, with one masked activist lunging at police lines as bottles and punches are thrown from the crowd.

Later on, another man photographed standing next to a Britain First flag launched a flying kick on a policeman from behind, bringing the officer to the ground. The man, who has at least 110 previous convictions, has since been arrested.

Golding later took to social media the next day to complain about the “aggressive, rude and intolerant” way the police had treated the marchers, and even declared that “the police got what they deserved yesterday”. This is not an unusual sentiment from him – he has previously referred to police as being “corrupt”, “goons” and “heavy-handed”, and complained about being persecuted.

“You’ve got to remember – the police are not on our side. They’re a bunch of self-serving, corrupt, jobsworths. I’ve got no sympathy and no love for the police.”

So clearly Britain First actually agrees with many of the concerns raised by Black Lives Matter about policing, and their pretence at “standing with law enforcement” and decrying a “lack of respect” shown to officers is a stance they only take when those being policed are from minority communities. Yet another example of the limitless hypocrisy and opportunism of the far right.